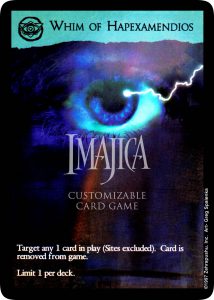 How many times have you played a game of Imajica where you found seemingly useful cards sitting in your hand from start to finish? When you were building your deck, the cards seemed great, but in actual game play they just weren’t that important. The formal description of these crisp pieces of unused cardboard are “dead” cards. In collectible card games, matches are won and lost depending on the quality of the cards you draw.

Therefore, in constructing an effective Imajica deck, a great deal of planning and design should be devoted to minimizing the number of these dead cards. Additionally, your design should also include a method of creating dead cards in your opponent’s hand.

As a first step in this design process, a player should identify which cards in their deck have the potential to be “dead”. Sometimes, these cards are plainly obvious. If your deck contains the Combat Action Summon Nullianac and no Nullianacs, then there is very good chance that you’ll never play that card. Don’t play the Influence Maneuver Prayer Book if you have no Adorers or Aphrodytes. Obviously, these types of errors can be eliminated with just some common sense, but some other cards may require a bit more analysis.

Cards that require another card to be in play before they can be used can cause trouble if your deck is not prepared correctly. Building a deck with a powerful Ally Action card, but only one Ally that can use it effectively will most likely make the Ally Action a dead card, as the chance of drawing both cards together is very slim. The same philosophy holds true for Paths because Paths are limited to being played only on Sites from a matching dominion.

You may have to accept the fact that if you draw your favorite evil Path late in the game, your opponent might already have the corresponding Site in his state and the card will sit unhappily in your hand the rest of the game.

In building your deck, make sure that you aren’t depending on too many other factors to make a single card effective. Try and use cards that are useful at all times. A card that is useful on your first turn and useful on your last turn is a good card. If you do insist on playing risky cards, play with a couple of Destiny cards so you can trade the dead cards out once they have lost their worth.

Once you’ve optimized your deck by reducing the chance of drawing dead cards, you have to start looking at increasing the number of dead cards in your opponent’s deck. This is a very difficult task, but if you understand your opponent, knowing what types of cards they like to play, then you can effectively build a deck that will make them writhe in frustration fumbling through a worthless hand.

As a primitive example, lets look at some of the most popular cards in current tournament quality decks: Espionage, anything Hapexamendios, and Public Executions. All of these power cards have weaknesses. Espionage needs someone to actually cast a Dictate in order to be played. If you build your deck with no Dictates and Espionage becomes less useful than a dead Tabula Rasan. Similarly, since Hapexamendios cards cannot target Adorers, building a deck made almost completely of Adorers could be an effective way of making those cards worthless. In the case of the dreaded Public Execution, high Prime is the foil. Play high Prime Allies or stock cards that increase your Allies’ and you can avoid the execution.

To close, I’ll share an experience from the days of Imajica’s initial release at DragonCon ’97. As we were all eagerly opening cards and trying to trade to complete our collections, we began to discuss which cards were the best as gamers tend to do. At this point, some of my booth-mates began snatching up cards to build extremely aggressive decks with an excessive amount of character removal and Combat Action cards. They theorized that if their opponent had no Allies then there is no way he could win.Although this is a very good theory, it can be overdeveloped. Seeing all the cards my future opponents were gathering for their decks, I decided to focus on the second victory condition and build a reactive, defensive deck based on running my opponent out of cards. I gathered innocent little Flashes like Graveolents and Breaches of Contract. I believed that if I put no Allies in my deck, I could effectively cut my opponent’s options in half by giving them no targets to stomp on. Amazingly, my theory worked. After each of those early games that I won from an exhausted destiny, my opponent would show me their hands and point out all the mean cards that they should have crushed me with but couldn’t because of the stupid deck I was playing. Hmmmm… was it really that Stupid?