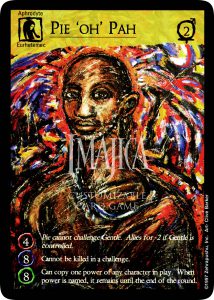 If both characters are active and unpivoted, you can create a powerhouse combination with two favorite main characters. At any time during a round, Pie ‘Oh’ Pah can use his power. Name the power Judith’s Odell’s Ally Action power. Pie ‘Oh’ Pah is NOT pivoted. Judith Odell’s Ally Action power can be used in the Ally Phase when she is Active. “[Ally Action] Pivot any number of males up to a total Prime of 10.” If he is still active, use the power again as Pie ‘Oh’ Pah’s named power. This combination now allows you to pivot any number of males up to a total Prime of 20. After their powers are used, Judith Odell and Pie ‘Oh’ Pah are pivoted. Ways to combat this combination are to include females, Holograms, Klupos and Scintillants in your deck. Thanks to Rory Birch from the UK for presenting this combination. 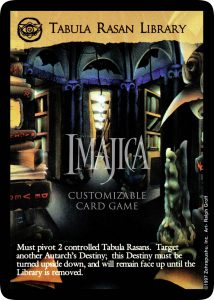 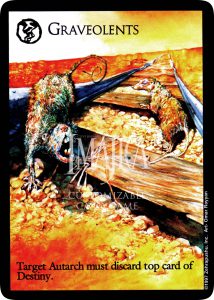 The ultimate card-eater combo. The Library turns your opponent’s Destiny upside-down, revealing their cards as they draw. See something you don’t like? Then discard it with the Graveolents. “Is that Whim of Hapexamendios I see? Well, discard it, please!” You can build a whole deck around this theme! 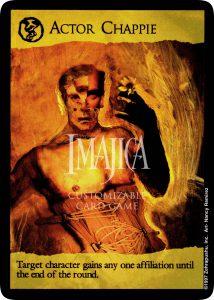 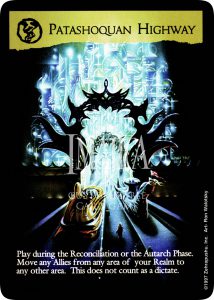 This gimmick lets you move your weak but high-magic characters (like, say, Flaute) straight from Reserve to hold a newly secured Site. Wait until you are the leading Autarch for the turn. On the previous turn, just make only one tough Ally active. You might want to make the Ally a real tough, high Strength character, like Coaxial Tasko. Leave all your high Magic characters in Reserve, where they are safe. Then, since you act first, you play your Actor Chappie on this single fella, and make him a Maestro! When he secures the Site, he remains a Maestro until the end of the round, allowing you to use Patashoquan Highway to move those protected high Magic characters from your Reserve, straight to the new Site! 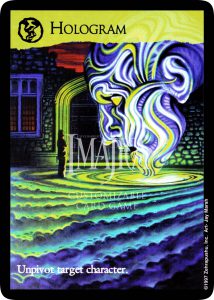 Here’s a nasty little trick. Everyone knows how bad your opponent’s day gets when you play an Yzorrderexian War Machine, but if you spice it up a little with a few Holograms, (which allow you to unpivot any ally) victory is yours! Just attack one of his/her allies, then use the hologram to unpivot the war machine and do it again! Repeat until your opponent is begging for mercy!

Holograms work great with Judith also. Use Judith’s special ability to tap up to 10 prime worth of your opponents’ male allies, then use the hologram to unpivot her and do it again until all your opponent’s males are pivoted! How ruthless! 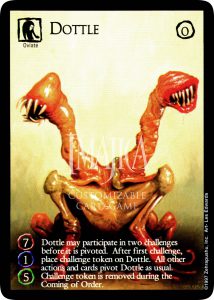 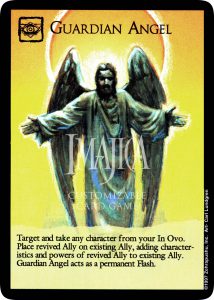 How about this super-destructive combo:

First bring out a Dottle, the groovy little ally that can attack twice before pivoting. Then during your next Autarch phase, use a Guardian Angel that allows you to go into your In Ovo (If you’re lucky, there’s a Yzorrderexian War Machine in your In Ovo!) and fetch any critter to slap on top of Dottle, adding all statistics and abilities together thus allowing them to act as one Super-Ally! 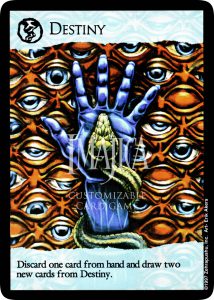 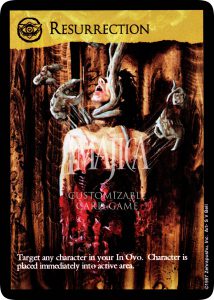 This little combo allows you to put any ally out in the very first round regardless of it’s prime number! First, during your Autarch phase, play a Destiny that allows you to draw two cards from your Destiny pile and then discard one card from your hand to the In Ovo. Make sure you discard your biggest, scariest ally! Then use the Dictate called Resurrection to bring any ally from your In Ovo directly into the active area! Trust me, your opponent will cry! 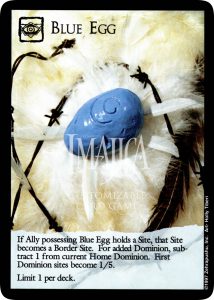 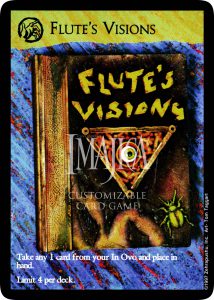 This has to be the very best combo we’ve found yet! It allows you to pull any two cards you want from your In Ovo to your hand every turn!

Thanks to Smith Ellis and Aneal Khimani and all the other play testers for aid in creating this page. 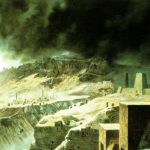 Collecting and Using the Non-Unique Sites